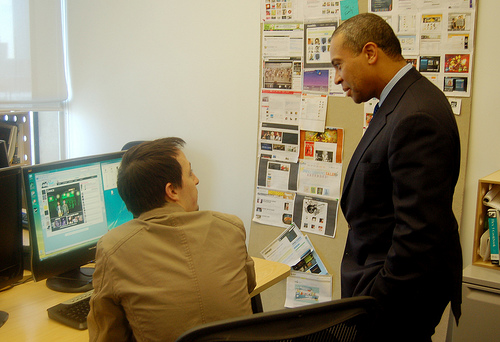 Massachusetts Governor Deval Patrick (right) continues to invest in workforce training to serve high-tech manufacturing companies. How can people with disabilities be included in this effort?

To no one’s surprise, monthly unemployment statistics from the U.S. Department of Labor continued to disappoint. People with disabilities could not even share satisfaction in the minuscule reduction of the unemployment rate from 8.3% to 8.1%. That figure is still better than the 0.3% increase in experienced by this demographic.

Shaun Heasley of Disability Scoop noted the unemployment rate for individuals with disabilities had been increasing all summer long, after dropping below 13% in April and May for only the second time since 2009. He also included the media’s obligatory caveat that the Labor Department’s calculation excludes people who have given up looking for jobs, which makes the numbers even bleaker for both people with and without disabilities during the past month.

Job creation continues to be the top concern of the American public and the central issue of the current presidential campaign. No matter which horse you’re rooting for in that race, most everyone agrees that a greater focus on career training and workforce education is part of the employment solution.

Murphy’s article, found here in Friday’s Lowell Sun, includes some interesting figures related to manufacturing jobs in Massachusetts. He quotes a report from The Center for Urban and Regional Policy at Northeastern University which says 43 new manufacturing firms started in the state during 2011, and that the number of manufacturing jobs have been stable since 2009.

Both outcomes are the result of efforts to transition the economy toward new sectors of manufacturing. But the continued investment in the workforce is necessary to prevent these jobs from leaving Massachusetts or the United States altogether, says Secretary of Economic Development Greg Bialecki:

We have not had enough young people going into manufacturing so the age of our workforce is high and growing… Of those 250,000 working now, there will be a lot of retirements and attrition in the coming decades and that means we’ll need tens of thousands to go into manufacturing.

As previously noted, high-tech companies in California have benefited from hiring people with disabilities. We also know that work in the manufacturing sector stimulates other types of jobs that can be performed by these individuals, especially with tasks like light assembly, packaging, and order fulfillment. Young or old, there is a population of employees with the skills and experience to help keep the Massachusetts economy on track and maybe even make a dent in those unemployment figures for both people with and without disabilities.