Wisconsin Pushes for “Employment First” Policy for People With Disabilities 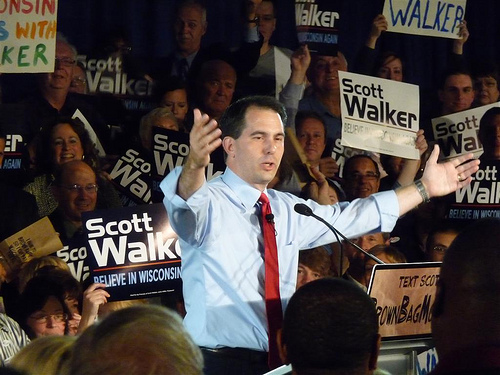 Getting Governor Scott Walker to make Wisconsin an “Employment First” state will be an important step toward improving services for individuals with disabilities, advocates say.

Now that the Wisconsin gubernatorial recall election brouhaha is over, advocates for people with disabilities are hoping Governor Scott Walker will issue an executive order making Wisconsin an “employment first state,” which would provide training, support, and/or tax breaks to organizations that assist these individuals through opportunities for employment.

In her June 15 article for The Isthmus Daily of Madison, reporter Nora Hertel says the push is motivated by the publication of “The Case for Inclusion 2012,” a quality-of-life survey issued by United Cerebral Palsy in May. Wisconsin dropped from 20th to 27th in the state-by-state rankings of services provided to individuals with disabilities, according to the report. Now, some 40 groups under the umbrella of The Survival Coalition of Wisconsin Disability Organizations have issued a series of recommendations in hopes of helping the state regain the high level of service it once provided.

The document (PDF) notes that the state was already lagging behind the national average for investments in competitive and supported employment even before reducing the spending by 3% in the last few years, while enumerating the benefits for both the individuals with disabilities served by these programs and the taxpaying public:

Wisconsin’s low employment ratings for people with disabilities can be tracked to its falling numbers in competitive and supported employment — options which improve the productivity of individuals with disabilities, allow them to work in their communities, pay tax and reduce reliance on public supports.

Hertel’s article says Wisconsin currently spends $288,350 annually in services for people with disabilities under the current system. The recommendations from the Survival Coalition would free up a portion of these monies to provide social services to people on waiting lists, much like similar transitions that took place earlier this year in Illinois and Virginia, among other states.

As reported here in April, New Jersey becomes the 14th state to enact the “Employment First” policy, written (PDF) by the organization known as APSE a few years back “in order to advance the growing national momentum to focus on integrated employment as the desired outcome for individuals with disabilities.”

Massachusetts adopted the “Employment First” policy back in 2010. The state ranked sixth overall for services provided to individuals with disabilities in “The Case for Inclusion 2012” report. In areas of employment, Massachusetts ranked 14th in “percent of people served who are in competitive employment” at 29.25%; 11th in “spending per participant” at $11,012; sixth in total spending at $38,200,000; and 20th in the “vocational rehab — total number in competitive employment” with 3,035 people.

Image by WisPolitics.com, used under its Creative Commons license.