“Employment First” Policy for People With Disabilities Comes to NJ 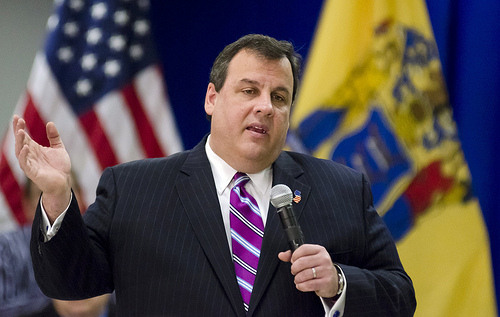 New Jersey Governor Chris Christie is emphasizing employment as part of the state's new approach to supporting people with disabilities.

Susan K. Livio, statehouse bureau reporter for The Record, covered Governor Chris Christie’s press conference announcing New Jersey’s “Employment First” policy, calling on government to “remove any barriers or practices that might prevent people with physical, developmental and mental disabilities from holding a job.” Her article leads off with an anecdote about Bill Byrne, a 58-year-old Morristown resident in attendance at the press conference, which exemplifies just a few of the merits of hiring people with disabilities and what it means for people like Bill:

The Arc of New Jersey helped Bill Byrne get an interview for a kitchen job at the boys prep school… but Byrne believes he got hired on the spot because he works hard and he’s ‘fussy’ about making sure everything is clean and organized. ‘My supervisor took a chance on me,’ said Byrne… ‘Some places might be scared to hire people with a disability.’

Governor Christie’s press conference also came on the heels of an infrastructural shift in responsibility for supporting children with disabilities from the Department of Human Services (DHS) to the Department of Children and Families (DCF), which was announced in an op-ed co-authored by the commissioners of those respective departments, Jennifer Velez and Allison Blake, found on the website for southern New Jersey newspaper, The Daily Journal. They write:

DCF is positioned to provide a holistic approach to serving children with autism and other developmental disabilities. DCF and DHS will ensure a seamless transition to provide needed services and supports as part of a transition plan for older youth moving into the adult system.

New Jersey becomes the 14th state to enact the Employment First policy, written (PDF) by the organization known as APSE a few years back “in order to advance the growing national momentum to focus on integrated employment as the desired outcome for individuals with disabilities.”

Massachusetts adopted the “Employment First” policy back in 2010. In fact, the state chapter of APSE will be holding its annual conference tomorrow at the College of the Holy Cross in Worcester. The keynote will be made by National APSE executive director, Dr. Laura Owens, and they will unveil the recipient of 2012 Job Developer of the Year award.

But remember that whether you’re an employer looking to give individual with disabilities a full-time position or looking to have light assembly or other fulfillment duties provided by contract services, you are helping make Life Matter for people with disabilities by giving them an opportunity to live their lives more independently.

Image by Bob Jagendorf, used under its Creative Commons license.