State of the Union Messages for People With Disabilities 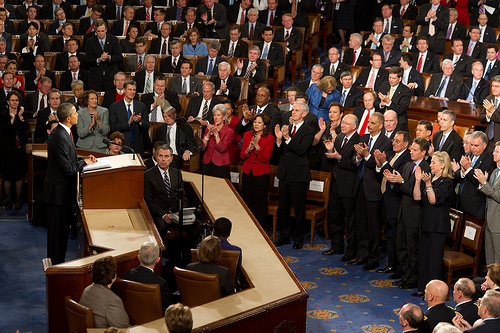 Much of President Obama's speech concerning the outsourcing of American jobs in manufacturing could have a positive impact for people with disabilities.

President Obama did not specifically address the impact of his policies on people with disabilities during his State of the Union Address on Tuesday, but his blueprint for “an economy built on American manufacturing, American energy, skills for American workers, and a renewal of American values” spoke to many of the issues these people grapple with in trying to get the necessary job training and career opportunities to be part of the workforce.

On the second page of The New York Times transcript of his address, the President begins his blueprint by referencing the actions taken by his administration and Congress in 2009 to preserve the millions of jobs along the assembly lines and other parts of automobile manufacturing plants. That success can be applied to other manufacturing industries, says Obama, citing Master Lock and its plant in Milwaukee, Wisconsin, that is running at 100% capacity for the first time in 15 years by bringing outsourced jobs back to America, concluding:

So we have a huge opportunity, at this moment, to bring manufacturing back. But we have to seize it. Tonight, my message to business leaders is simple: Ask yourselves what you can do to bring jobs back to your country, and your country will do everything we can to help you succeed.

As we covered in December, the U.S. Labor Department is already proposing changes to the process of awarding government contracts that raise the standard of accountability each business will have to show with respect to recruiting people with disabilities. As of now, that rule is currently a little more than halfway through the 60-day review process. If it’s approved, it will ask companies receiving government contracts to strive to have 7% of their workforce be comprised of people with disabilities.

For companies operating exclusively in the private sector, the President knows tax incentives are the way to ensure contract labor jobs remain domestic. The types of jobs in manufacturing, assembly, and packaging are endless, and many are ideal for people with disabilities.

In the community of Oakdale, Minnesota, these kinds of job opportunities are actually increasing for people with disabilities. Oakdale-Lake Elmo Review staff writer Heather Edwards begins her story with a description of some of the tasks these people perform:

Most people don’t think about who put together the parts in their golf course threshing machine. Nor do they give much thought to the people who put the labels on aerosol cans.