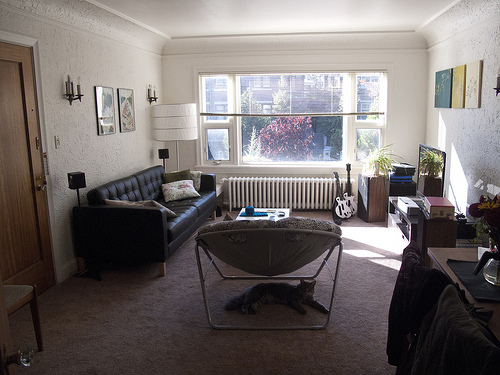 A man taking his laundry out of a dryer; a young couple sharing a music lesson; another man sitting at his kitchen table slicing a banana. These are all subjects of photographs taken by The Star-Ledger photographer Jerry McCrea, which accompany reporter Dan Goldberg’s article, “Developmentally Disabled Adults Discover the Joy of Independence in Hanover,” published last Sunday. And if the images sound mundane when put into words, that’s exactly the point.

Housing has been anything but a picture domestic tranquility for people with disabilities living in New Jersey in the past few years. A state waiting list for housing and other services currently tops 8,000 people. Goldberg says some people have had their name on that list for years.

But New Jersey governor Chris Christie may have started the ball rolling in the right direction. Just as 2011 came to a close, his office announced a $10.2 million dollar initiative that would be used to purchase homes for people with disabilities. Half the funding comes from affordable housing trust funds in a dozen municipalities, which the state is then matching dollar-for-dollar.

The announcement was endorsed widely by New Jersey media. A December 22 Herald News op-ed called it “hard evidence” that Governor Christie’s administration is making housing for people with disabilities a priority. Department of Community Affairs commissioner Lori Grifa wrote a guest editorial for The Star-Ledger’s blog urging other townships to get involved in the Special Needs Housing Partnership, which is administered through her office:

The Partnership is a proactive, affirmative approach to addressing the critical housing need for people with developmental disabilities and to support the rights of individuals to live as independently as possible in the community whenever possible.

Which brings us back to Goldberg’s article and McCrea’s photographs in the December 15 article about the residents of Rose House in Hanover. There are 12 tenants occupying the eight one- and two-bedroom units; each of them attending to the everyday tasks of life to the best of their abilities.

It’s the first time living away from home for many of the residents, including 30-year old Stephen Somich (the aforementioned man pictured sharing a music lesson with girlfriend, who is also a resident of the complex.) Somich’s father, Steve, tells Goldberg that the transition has been a great experience for his son thus far:

It’s not that different than when our other boy went to college…What we saw was a growth in maturity and independence. He’s taking care of things like his wash, his meals, his haircuts, arranging for social events. He is not dependent on his mother to do that anymore.

Living on his own has carried over to create successes in other parts of Somich’s life; as we see in the article’s opening paragraph when Goldberg describes the young man’s apartment decor, which includes a plaque from his place of work recognizing him as “most improved worker.” As New Jersey’s new independent living program makes life matter for other people with disabilities, hopefully other success will soon follow.

Image by austin.happel, used under its Creative Commons license.