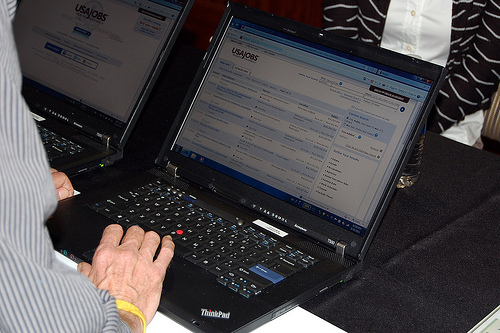 As April draws to a close, the U.S. economy continues to grow, albeit modestly, and more Americans returned to the workforce, albeit slowly. For people with disabilities, the early spring has been a time for planting seeds in hopes for future harvests. Job fairs organized by state agencies are giving them face time with potential employers, and vocational training programs mixed with contract services continue to provide short-term and long-term opportunities for these people to live more independently.

With such programs still in their early stages of developments, however, expectations for outcomes need to be tempered with the realization that there is probably a great deal of fine-tuning to still be done. The tracking of employment for people with disabilities did not even begin until the Fall of 2008, as Disability Scoop points out at the close of each month’s report on U.S. Department of Labor job statistics.

It’s hard to find a solution for anything without first being aware a problem even exists. But with the unemployment for people with disabilities remaining well above the national rate, the need to find better ways to serve this population is well-established.

Federal Computer Week staff writer Camille Tuutti article from last week, “Technology bridges the employment gap for feds with disabilities,” does a nice job of taking readers through the process of setting up the government site, eFedLink.org, which connects HR professionals at various agency with job applicants with disabilities. Through its first six months, Tuutti writes, there are a lot of voices contributing to the process, with the feedback being synthesized by the Cornell University Employment and Disability Institute, which developed the site in conjunction with the Labor Department:

Since its inception, eFedLink has developed 16 planning groups with two or more members, eight of which have 10 or more members…’The website has changed a lot since the launch because we’ve gotten a lot of responses from people with disabilities in the federal sector as well as advice from managers on how to make it easier, more useful,’ said David Brewer, senior extension associate at the institute.

An interesting revelation on recruiting people with disabilities comes from a press release put out by the Midwestern retail chain, Meijer, touting the success of a Fresh Assembly program that provides packaging and distributions jobs for people with disabilities. Meijer has set a goal to have 40% of the employees in this department be individuals with disabilities, and as the company’s senior HR director, Michael Gamble, points out the efforts to do so have proven beneficial to other segments:

How would you improve efforts to recruit people with disabilities? Share in the comments section below.

Image by USAG-Humphreys, used under its Creative Commons license.