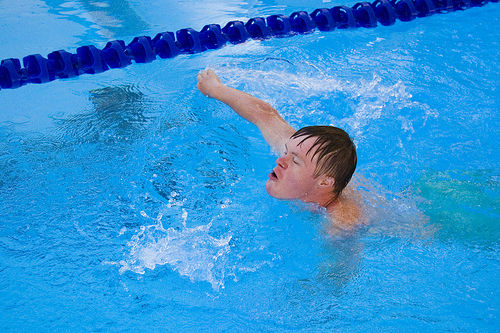 According the The Old Farmer’s Almanac, the seasonal clock officially changed from spring to summer yesterday at 7:09 pm EDT. The summer heat wasted no time in making its presence known, and will teeter on the brink of triple digits here in the Northeast for at least another day or so. Sounds like a great time to find a nice, cool body of water to sit nearby with a good book, and every once in a while take a refreshing dip. Or is it?

If you are an individual with a disability, relief in an aquatic environment may not be available to you yet. In fact, with the federal government granting yet another extension to pool owners to meet new requirements mandated by an update to the Americans with Disabilities Act (ADA), an accessible swimming pool may not be available to a town near you or at a vacation spot until 2013.

This is the second extension granted since the original March 15 deadline requiring hotels, water parks, health clubs, etc. to install swimming pool lifts, which was part of a 2010 update to the ADA that focused on access to recreational amenities. Despite having two years to plan for the new guidelines, lobbyists for the hospitality industry lodged eleventh hour protests claiming confusion over what construed “readily achievable” accommodations under the new guidelines, and were granted a 60-day extension. When that elapsed at the end of May, the Justice Department pushed the new compliance date back to early next year.

That decision was met with a large dose of cynicism from advocates for people with disabilities, according to this Associated Press article by Andrew Taylor. They already considered the hospitality industry’s maneuver “disingenuous,” as characterized by the United Spinal Association attorney, Heather Ansley. Now the new deadline conveniently takes this issue out of the spotlight during an election year.

Enough was enough for the American Association of People with Disabilities, which organized a protest outside the Washington, D.C., headquarters of the American Hotel & Lodging Association last week. CNN.com correspondents Anna-Lysa Gayle and Eric Fiegel filed this report, which included an eloquent summation on the inequity of the circumstances by Ann Cody, one of the more than 100 demonstrators on hand that day:

This summer, 70% of Americans will be going on vacation and staying at a hotel with a pool — it is something that is very important and it is a summertime activity that our communities celebrate in and participate in — and most of us with disabilities don’t have an opportunity to engage with our neighbors and friends and families because they aren’t accessible.

So even though Americans with disabilities represent $1 trillion in discretionary spending, according to the latest census information, it looks like its going to be another long, hot summer for these individuals.