People With Disabilities Not Invited to Pool Party Just Yet 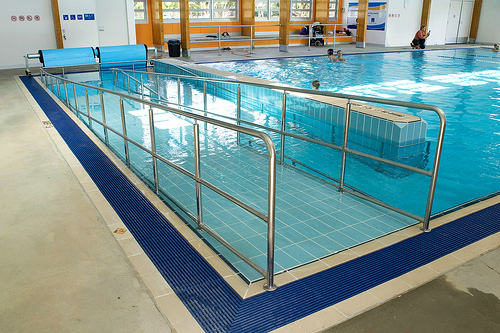 On the day when updates to the 1991 American with Disabilities Act’s regulations governing public accessibility were supposed to go into effect, the Justice Department granted hotels a 60-day extension regarding adjustments to swimming pools and whirlpools.

USA TODAY travel writer Barbara De Lollis wrote the extension was something that the “hotel industry lobbied hard for at the 11th hour,” following complaints from hotel owners that they would have to shut down their pools for not being in compliance. De Lollis adds an excerpt from a Justice Department press release indicating a 15-day comment period will take place during the extension, in which it will consider extending adherence to the new swimming pool requirements by another six months.

As we mentioned last Thursday, March 15, 2012, was the date in which new requirements would go into effect for new construction projects, barrier removal, alterations, and program accessibility in commercial and municipal facilities. These updates to the original standards outlined in Title II and III of the ADA were passed in September 2010, giving those affected a two-and-a-half-year window in which to achieve compliance.

But the Justice Department is willing to make an exception in the case of hotel swimming pools after seemingly sending out mixed signals on what types of modifications would constitute compliance. A CNN.com article co-written by Todd Sperry and Mike M. Ahlers explains:

A hotel industry association said the government originally indicated portable lifts were acceptable, but reversed itself in a legal interpretation released early this year… Pool operators said there is also widespread confusion about language in the law that says they must accommodate disabled individuals to the extent that it is ‘readily achievable’ to do so.

CNN devoted some airtime to the issue as well (watch the video below). Erin Burnett moderated a discussion between trial lawyer Justin Leto and Reason.com editor-in-chief Nick Gillespie that mostly focused on the political and litigious elements of the decision, but about two minutes into the interview Leto makes the following point regarding concerns about the costs for making updates that accommodate people with disabilities:

… [S]mall businesses get a tax credit for putting this into effect; they get a $5,000 tax credit, and then if you have to move things or do some type of architectural work you get a $10,000 tax credit. And that’s per year for everything you have to do to come into compliance with this law.

Should a portable lift be considered adequate compliance? Share your thoughts in the comments section.