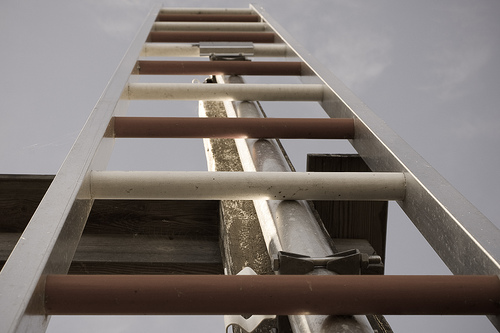 The ladder has been the symbol of success for American workers since the dawn of the industrial age. Getting in on the ground floor, learning all the facets of a job, and then climbing steadily in responsibility and stature over time until, one day, you find yourself running the company is a story that really does play out in real life. Maybe the goal isn’t always to be the president and CEO of a global corporation. Sometimes it’s about shaping one’s role in an organization to better suit one’s strengths and interests; what career development experts call “job crafting.”

Reliability, loyalty, and enthusiasm are some of the common traits employers evaluate when considering whether or not to promote an employee. Yet, as Forbes’ Campus to Career blogger Jacquelyn Smith posted earlier this month, most young people entering the workforce lack the level of patience and persistence required to advance their careers, and risk making rash decisions that affect their long-term goals.

These are also the same characteristics that employers of people with disabilities point to as why these people become so valuable to an organization. Mitchell Youngkin of Ocala, Florida, is the latest worker to exemplify this standard of excellence, and Marian Rizzo’s June 12 article for the Star-Banner recognizes him for it, while offering an object lesson in all aspects of what it take to advance a career.

Start with the fact that Youngkin’s first job at Jenkins’ Mazda was washing and detailing cars, even though it had nothing to do with his interest in working with computers. His bosses say he proved his reliability and loyalty by showing up on time and not taking a lot of sick time. When he was given less than glamorous tasks that are typically assigned to the low person on the totem pole, like cleaning the supply closet, he would perform them above and beyond expectations. “To this day, you can eat off the floor,” says Mitchell’s general manager.

So when the position as Internet Sales Representative became available, Mitchell deserved the chance to prove he could do the job. The only surprising thing about his performance seems to be just how good it is, as his direct supervisor Jose Alonso tells Rizzo:

You only have to tell him once and it’s done. In fact, he finds ways to make it better. The amount of time and money that he helps save, it’s really just amazing.

For employees, keep Mitchell Youngkin’s example in mind the next time your job requires you to do something you don’t necessarily want to do, and remember to make it fit into your higher goals. For employers, never underestimate the value that individuals with disabilities bring to the workplace through their hard work and positive energy.