The $64 Answer to Outsourcing Jobs to Americans 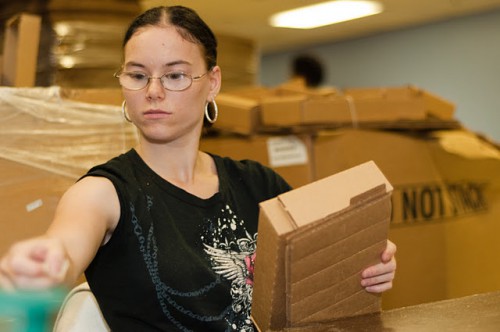 Buying American products this holiday season can create more job opportunities for people with disabilities in assembly, fulfillment, and other links in the supply chain.

What would you buy if someone walked up and gave you $704 in cash to do some holiday shopping? The CEO of an new online retailer recently approached shoppers in New York with that very amount of money, along with a challenge to spend it only on American-made products.

The benefactor is David Seliktar, founder and CEO of Keep America, a new online company with a website that directs shoppers to products made by U.S. companies. Initially Seliktar intended the site to launch in February. But as he tells Joe Mont of NuWireInvestor.com, he thought the publicity stunt would direct consumer attention to the positive impact that spending dollars on American products can have on creating jobs:

You buy American goods and American suppliers get an increase in orders that creates more production. They hire more people, those people now have more money to spend. It’s a beautiful cycle.

The $704 challenge corresponds to what the National Retail Federation projects as the average amount each American spends on holiday gifts and decorations annually. Seliktar’s impromptu experiment demonstrated how difficult it is to exhaust that amount of cash on American-made products found in our country’s department stores, shopping malls, and boutiques.

But it did give him the desired national exposure to promote a more modest goal of spending $64 at his new site. If every American dedicated that small fraction of their holiday budget to products made in this country, says Seliktar, it could create as many as 200,000 jobs in the United States. To make it as easy as possible, every piece of clothing, jewelry, bottle of perfume, and other merchandise are available for $64 until the official site launch in February, when the full catalog will be made available.

Mont also talks to Robert von Goeben of Green Toys, a northern California manufacturer that turns recycled materials into blocks, trucks, and tea sets, among other traditional playthings. Green Toys also keeps all facets of it production process domestic, from manufacturing to packaging to product assembly and fulfillment.

As von Goeben tells Mont, thinking beyond one’s own bottom line is critical to ensuring the long-term health of our economy:

When you buy [one of our products], you are supporting not just us and our factory but the shipping company, the package printers, the warehouse, the testing labs, etc. For every direct job a purchase helps create, it supports many more jobs that exist around it.

Many of the types of jobs von Goeben describes are the ones often performed by people with disabilities, either through direct hiring or contract labor. What would the American workforce look like if some of the hundreds of thousands of seasonal temp jobs became full-time employment opportunities for these people? Spending $64 will help you find out.