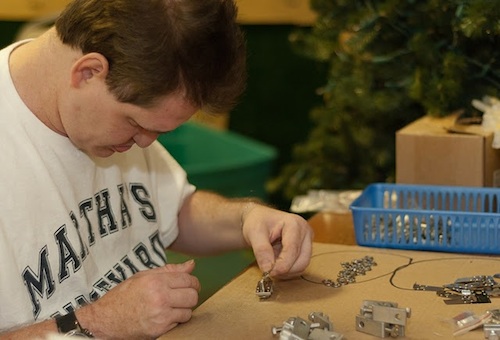 Contract labor jobs that take advantage of the tasks people with disabilities are capable of performing help them lead fulfilling lives outside of work.

Hartford Courant columnist Susan Campbell writes a great deal about the underserved population in and around Connecticut’s capitol, particularly with respect to families. Last week, she and photographer Richard Messina spent some time with Lois Nitch and her son, Andrew John Puglisi, for an article in advance of a workshop Nitch conducts to help parents of people with disabilities prepare for life beyond a child’s school years.

In Connecticut, mandated governmental support for families of children with disabilities stops when that child reaches 21 years old. Nitch’s program covers everything from living arrangements to aid opportunities to getting a job. Getting these questions answered for her own son Andrew, who is now 46 years old, has given her a great of firsthand experience to share with other families.

Considering the severity of Andy’s disabilities, there was a time when Nitch wasn’t sure whether Andy could adjust to life after school. But thanks to the efforts she has made on her son’s behalf, Andy has gained a great deal of independence. He lives in a group home with other people with disabilities, which has given him greater maturity than he had previously. Campbell writes:

He is putting aside his Matchbox cars in favor of watching sports with the men with whom he shares a home. And occasionally, he will turn to his mother and say, ‘Mom? I’m happy. Don’t I have a nice home to live in?’

The story’s accompanying photos catch up with Andy at his contract labor job in Torrington. His tasks include putting nuts and bolts into containers, which he then weighs on a digital scale and packages. While there are gaps in what Andy can do for himself in his personal life, his work situation utilizes his abilities to perform tasks that involve multiple steps in a process. He can focus on the meticulous hands-on work of separating the nuts and bolts, as well as perform the necessary mathematics required to sort and package the hardware.

On the story’s Web page, Messina has added video of Nitch talking about her son with audio laid over the photos of Puglisi at work. One can hear the pride in her voice as she talks about what Andy has accomplished and what having a job and his own place to live has meant for his well-being:

He loves his job. He does it independently. And he’s happy. He feels very proud of himself doing his job. So his life, as far as I’m concerned, is just about as normal as it could be.