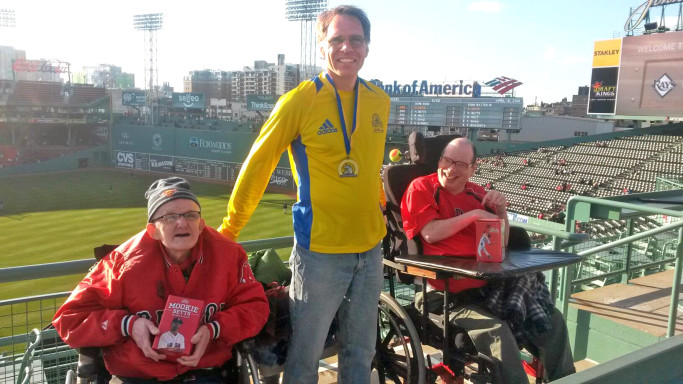 At Monday’s Boston Marathon, we watched countless runners take on and conquer 26.2 miles of pavement. We watched in awe of their dedication, their passion, their endurance. We cheered on athlete after athlete, and this year we were lucky enough to know one of those inspiring runners. He’s someone who inspires us every day with his passion and dedication to serving our Residents; our Specialized Housing Colleague Peter Heslam.

On Monday, Peter ran his 13th Boston Marathon, and 51st marathon, finishing with an incredible time of 3:34:27.

He ran, battling the hot sun which took its toll even on some of the best runners. “At mile nine, I knew it was not my day, so I grinded out the last 17 miles,” he shared. Still he finished with an impressive time and just over an 8 minute per mile pace.

Peter’s sister, a runner, inspired him to get into the sport many years ago, leading him to his first marathon, the Maine Marathon, in 1992. He set a PR two years later at the Lowell Marathon, with a time of 2:55:59 (that’s a 6:43 per mile pace!). And two years after that, he ran his first Boston Marathon, the Centennial Boston Marathon in 1996, which had the largest runner turnout ever for the race, with more than 38,000 participants.

Peter was hooked. The Boston Marathon had put its spell on him. “One reason I keep [running marathons] is to qualify for Boston because the crowds and runners are great,” he said. Though he’s now run several Boston’s since his first back in 1996, Monday marked his first since the 2013 bombing. And he’s happy to be back at it.

He’s already planning to return for next year. After qualifying last fall at the Maine Marathon, he’s ready to take on the 2017 Boston Marathon next spring. In the meantime, though, he’s hoping to do a destination marathon with his family this fall. 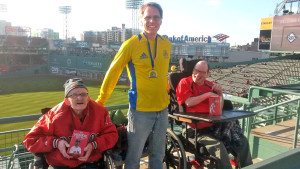 Hoping to run your first marathon? Peter believes you can do it! “Anyone can run a marathon if they’re willing to put the miles in,” he said. “Running can be a very social activity and there are plenty of races and running clubs in New England to join.”

Congratulations Peter! We’re very proud of you and your amazing accomplishments!
Be sure to share your kind words for Peter below!