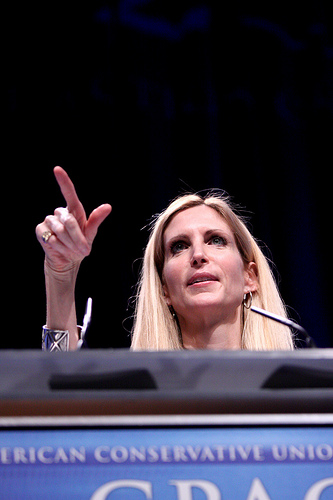 I’d like nothing more than to just ignore Ann Coulter. She seems to have found the magic formula for monetizing outrage in a way that no doubt makes all other talking heads envious, regardless of their partisan leanings. Even during a week where yet another male politician is in hot water for making stupid comments about rape and a Louisiana woman was literally set on fire in what looks to be a racially motivated attack, Coulter still managed to generate national headlines for her hateful provocations.

Fortunately, it has also generated some thoughtful responses, like the “Open Letter to Ann Coulter” from John Franklin Stephens that was originally posted on the Special Olympics blog and quickly went viral on social media. The Special Olympics is a driving force in the R-Word: Spread the Word to End the Word campaign. Spend a few minutes on that site and it’s easy to understand why many people with disabilities feel that — just like certain other words that demean people because of their color, gender or sexual preference — it is time to remove “retarded” from the lexicon of insults, humorous or otherwise.

Some may look at the comment Coulter made on Twitter following Monday’s presidential debate and deem it to be much ado about nothing; just another overreaction in a society that has become too “PC” and leaves no room for levity. That’s what some people emailed to Ellen Seidman, a magazine writer/editor whose blog, Love That Max, is a popular resource for families with children who have disabilities. Seidman posted a sample email and invited reader feedback. A poster by the handle of Laura@Catharsis offered a particularly cogent appeal, which reads in part:

Earlier in the month, Seidman noted that Coulter had used the same word in a tweet mocking President Obama’s video address to the National Forum on Disability Issues. But what’s worse than once again dredging up the same slur, in my opinion, is Coulter’s dismissal of the voice of people with disabilities in the upcoming election.

We’ve noted several times in the past year that encouraging participation in the political process has been a goal of the American Association of People with Disabilities. It was also a focus of many observations and activities that took place during National Developmental Disabilities Awareness Month this past March. Many of the issues facing all voters, such as the Affordable Care Act and the Republican plan to restructure Medicaid, directly impact people with disabilities; not to mention resistance from the private sector to implementing the new guidelines for accessibility phased in under the Americans with Disabilities Act and the Labor Department’s plans to increase employment opportunities for people with disabilities.

Coulter’s tweet that she “had no idea how crucial the retarded vote was in this election” underscores the need for these efforts to continue, even increase, as we near Election Day. On Tuesday, November 6, make sure you show Ms. Coulter and others who denigrate the voice of people with disabilities exactly what you are capable of doing.