CEOs Share Stories About Value of Employing People With Disabilities 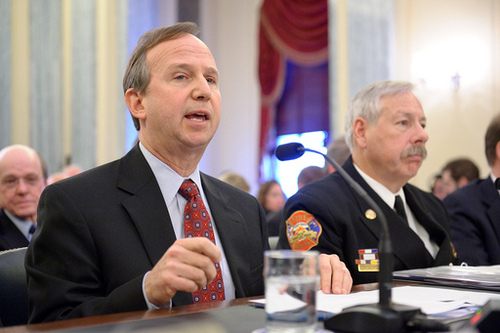 Delaware Governor Jack Markell, who is also vice chair of the National Governors Association, could play a key role in communicating corporate success stories with hiring people with disabilities; so the results can be duplicated across the country.

Executives from nearly 20 major U.S. companies gathered with government officials earlier this month for what is being called the “first-ever CEO Summit focused on employment with disabilities,” according to a June 18 press release issued by Walgreens, which hosted the conference at its facility in Windsor, Connecticut.

Best Buy, IBM, Proctor & Gamble, UPS, and OfficeMax were just a few of the businesses represented at the summit, where best practices and success stories about employing people with disabilities were shared with each other as well as Texas congressman Pete Sessions and U.S. Senators Tom Harkin of Iowa and Richard Blumenthal of Connecticut. Also present was Delaware Governor Jack Markell, who serves as vice chairman of the National Governors Association.

The location of the summit was strategically planned to offer participants a firsthand look at what a successful model of employing people with disabilities could look like. Walgreens had made an explicit commitment to having 10% of the workforce in its 21 distribution centers comprised of people with disabilities by the close of its 2012 fiscal year.

In the Windsor, Connecticut, facility alone, nearly half of the employees fall into this category, working at all levels and with the same expectations for performance. As Walgreens President and CEO Greg Wasson told his distinguished guests, the company’s investment has paid off in all of the ways a company measures productivity in that type of work environment:

Like our distribution center in Anderson, S.C., our facility in Connecticut has been 20 percent more productive than our others, with lower absenteeism, lower turnover and an excellent safety record… And importantly, we’re seeing a highly engaged workforce. Our guests from other companies that had set up similar programs at their facilities with a similar approach shared that they had the same experience.

Attendees quoted in the press release used terms like “powerful” and “inspiring” to describe the summit, and resolved to reconvene their meetings during this year’s U.S. Business Leadership Network conference in Orlando, Florida, as well as hold two additional summits in Dallas and Washington, D.C., in hopes of expanding the network of participants from the private sector and members of Congress.

While small and mid-size businesses may not be able to make the same investment in their workforce as these national corporations have, there are plenty of ways to enjoy the same benefits of employing people with disabilities on smaller scales. Contract Service divisions provide reliable, quality work for the same types of tasks performed at Walgreens and UPS distribution centers, including packing, sorting, light assembly, and order fulfillment.